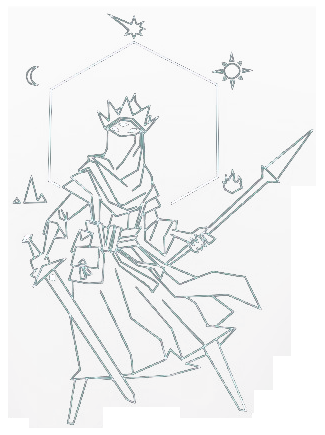 The archmage Abraxis took his secrets to the grave. The Archmage is one of the Characters in Necropolis.

There, in the depths of a huge complex constructed by magic, lies the greatest collection of magical items and treasure that the world has ever known. After all his conquests and victories, Abraxis retreated to his Necropolis to work his magic, in darkness far removed from the rest of civilization.

Abraxis is perhaps the most fabled legendary hero in all of Zothique; his accomplishments and feats were without end as he journeyed through the land.


The future Archmage was most likely born sometime during Zothique's Fourth Age - the Age of the Splintered Realm. It has been said that Abraxis was Khopeshi, but was of the "Mandesh" and not the "Fain." Of these two social classes, the Mandesh was the inferior. The pupils of Mandesh were taught in all manners of melee combat, and it would follow that for his short stint as a Mandesh pupil, Abraxis was taught these skills as well. Ultimately, this did not bode well with Abraxis, and he escaped the Mandesh barracks of Irem as a child "during a particularly brutal pillowfight."


By unknown means, Abraxis escaped to Midian, somehow travelling through the Sea of Glass. On the way to "Oonai," Abraxis rescued Slyn, the Goddess of Knowledge (and Sarcastic Retorts). She accompanied Abraxis to his destination, and as a gesture of thanks showed him how to steal the "Tome of the First Secret." This tome was the first of three "Arcane Mysteries," which Abraxis began to study in hermitage.


Upon understanding the Tome of the First Secret, Abraxis set out to bring peace and understanding to Zothique. Coincidentally, the Demon Emperor Ulixsteracktus began befouling the mortal plane. It is said that Ulixsteracktus was so large, his shadow fell across all of Zothique. The Demon Emperor was also known to have put to death anyone who could not pronounce his name. Abraxis had found his first notable adversary since the barracks of Irem itself.


Not much is known about the wars that transpired between Ulixsteracktus and Abraxis, save for the outcome. Upon the Cliffs of Red Despair, Abraxis killed the Demon Emperor, but not without cost to his own self. Though Ulixsteracktus had died, "some parts" of Abraxis were said to have died as well.


The Fifth Age - the Age of the Onyx Throne, was ushered in when Abraxis defeated Ulixsteracktus. Much of Abraxis' accomplishments occured during the Fifth Age. At a location called Iz, Abraxis defeated a total of seven Lich Kings one after another, all of which held Iz in their power. Ultimately it seemed destined that Iz would be ruled by a Lich King; for every one Abraxis defeated, the people of Iz "begged" and allowed for the rule of another Lich. Upon defeating Szut, the seventh Lich King, Abraxis finally left Iz to its fate.


An unspecified amount of time later, the Demon Sultan Gravx attacked the City of Pillars. Abraxis, now at this time known as Lord of All Mirrors, came to the city's aid. It was then that he realized that Gravx was possessed by the spirit of Ulixsteracktus. The Demon Emperor's spirit had somehow survived, and "slithered through the world like an oily serpent."


It was around this point in time where Abraxis tore time asunder, and in its gap he built the Navel of the World.


No details are recounted of the event, but Abraxis defeated Gravx - possibly with the help of his newly-created Navel of the World. He then annointed the Legendary Thirteen - thirteen of the best mages, fighters, and spies to be found across all of Zothique. Entrusting them to bring peace and justice to the land, Abraxis again shut himself away to work on his magic- this time in his Navel of the World. This coincided with the Hanged Lord of the East rising up to terrorize the land, a threat which Abraxis left to his newly-anointed followers.


Abraxis was said to be around his 500th year of life around this time. As the years passed, Abraxis grew more and more disinterested in the mortal world. He never returned from his seclusion.


While it is unknown as to what specifically denotes when the present Sixth Age - the Age of Haunted Winds - started, Abraxis is still unaccounted for. The event may have been the "Archmage's accident," which was responsible for the Navel of the World's rebranding as the Necropolis. The Archmage himself is rumored to still remain somewhere deep inside the Necropolis on his Onyx Throne.